If you’re looking for a relationship, be aware that some men just want to sleep with you.

Yes, there are usually signs a guy is using you for your body.

What does it mean when a guy uses you for your body?

It means that he likes the idea of sleeping with you, but doesn’t value who you are as a person.

He may be attracted to certain qualities about you — like your looks or personality — but he doesn’t see in you what makes you valuable as an individual human being.

12 Signs a Guy Is Using You for Your Body 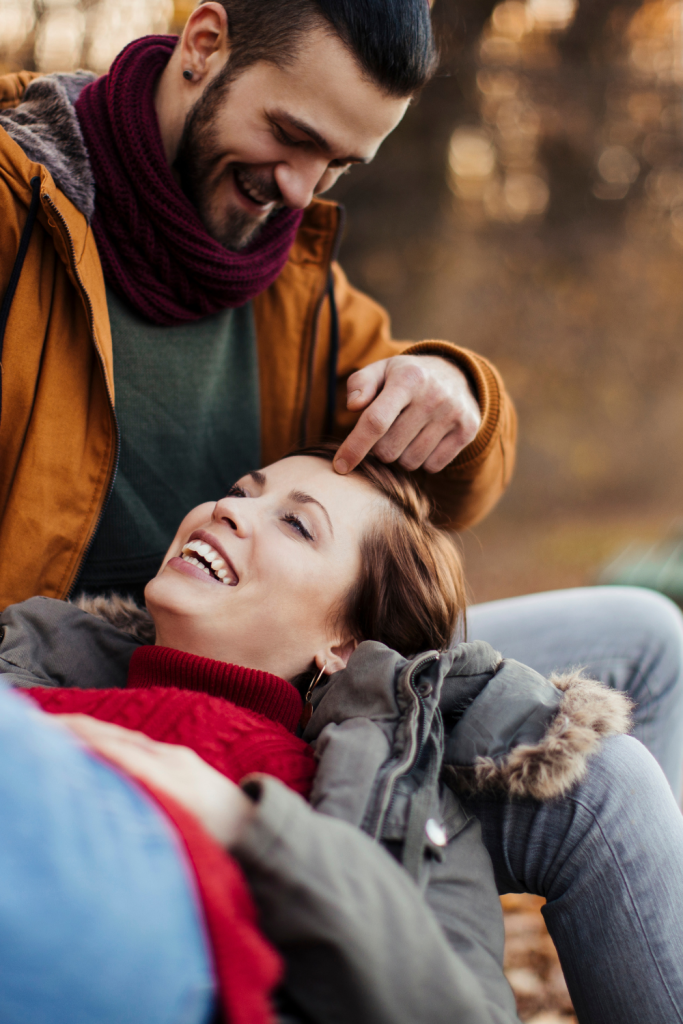 If he’s only interested in talking to you about sex, that’s a clear sign he only wants to use your body for his own pleasure.

He probably doesn’t care about who you are as a person, or what makes you happy—he just wants to get laid.

He never asks about what’s going on in your life or how your day was.

He doesn’t care about knowing anything about who you are outside of what feels good between the sheets.

He doesn’t care about getting to know you as a person; he sees you as an object that can fulfill his sexual desires.

This is a very common problem among men who are just interested in using women for their bodies.

2. He only texts or calls you at night 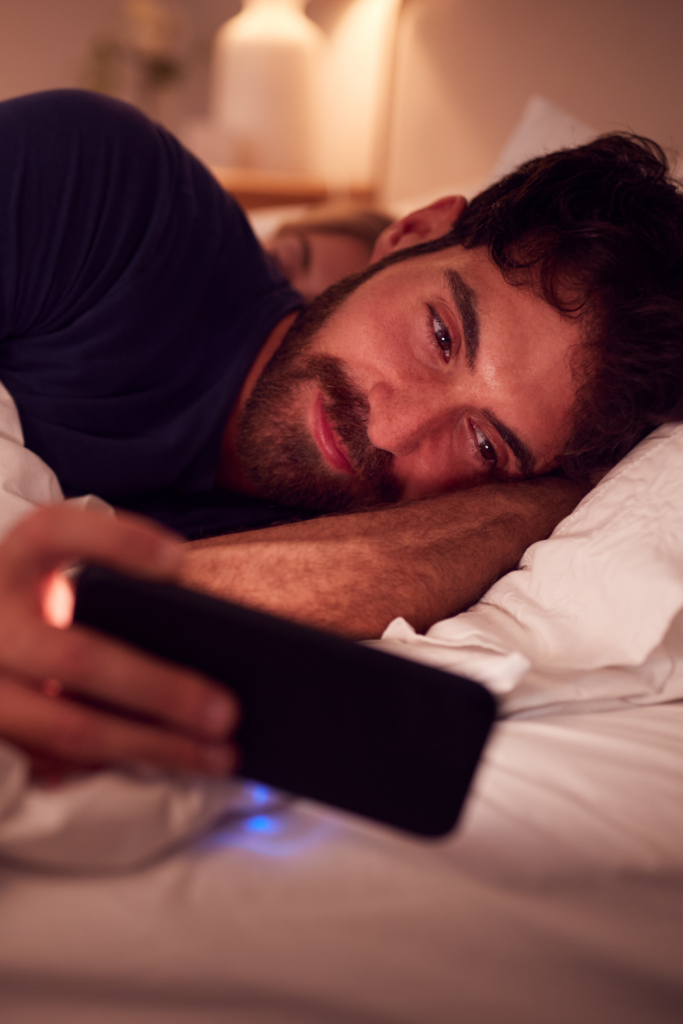 You know what’s the absolute worst?

It’s when you’re just chillin’ and the guy texts or calls you at night to see if you wanna hang out.

But it kind of sucks when he only texts or calls you at night because that means that he only wants to hang out with you when it’s dark out.

He wants to get in touch with you because he’s thinking about what he’d like to do with your body, but doesn’t want to make it too obvious.

That way, if you ask him why he’s texting/calling so late, he can just say “Oh, I was just checking in.”

3. You feel like he’s trying to get in your pants all the time 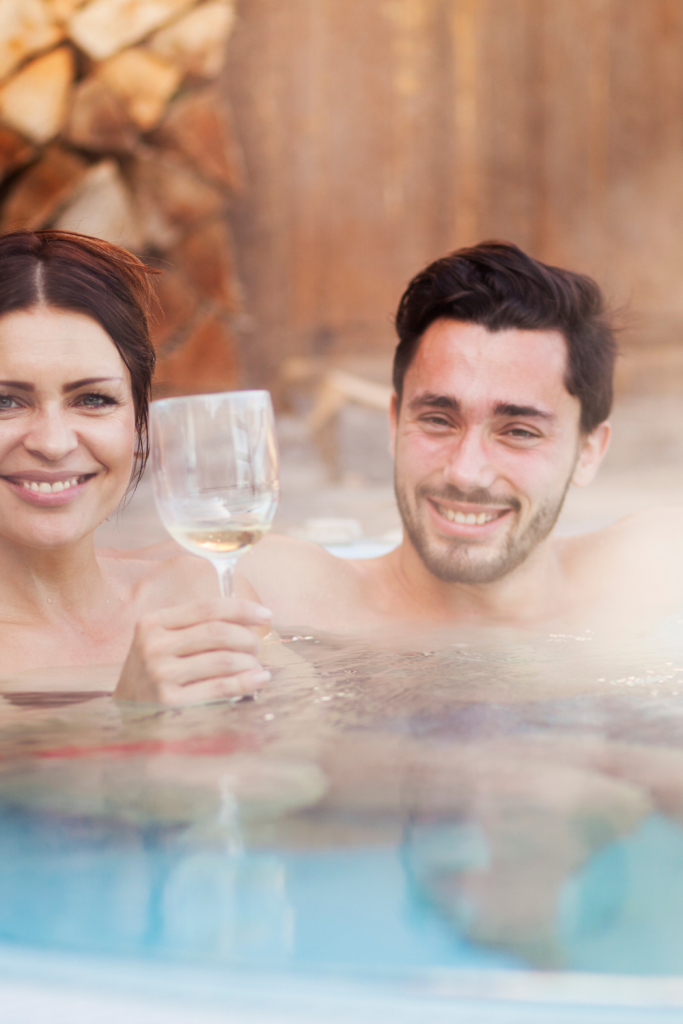 If you’re with a guy who’s just interested in getting into your pants, he’ll be persistent about it.

He might be pressuring you to go home with him or come to your place, ask to see you every night, try to get you to be alone with him every time you see him.

This clearly shows what he’s after, and it’s not your company.

4. You don’t go out on real dates together 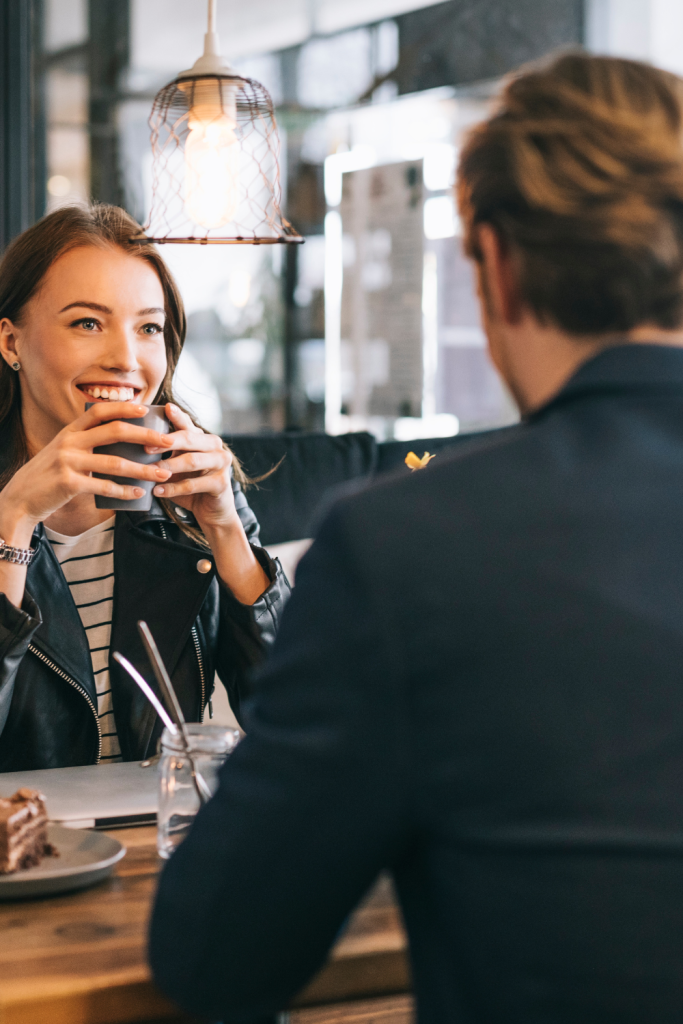 If the guy you’re dating doesn’t go out on real dates with you, he’s probably just using you for your body.

Not only does going out on real dates together help you get to know each other better and develop a deeper connection, but it also helps prevent awkward moments that will only lead to getting busy between the sheets.

So if a guy isn’t going out on actual dates with you, he’s obviously not interested in making an effort to know who you are as a person—and develop a real relationship with you.

5. He only compliments you on your appearance

A guy who is using you for your body will only compliment your appearance.

He’ll say things like, “Wow, that dress looks amazing on you!” or “You are so beautiful.”

He might even tell you that he loves your body or that he wants to see more of it.

This type of guy probably thinks of women as objects or trophies, and he’s using his compliments as a way to get close to you physically—and then maybe even further.

You might start to feel like the most beautiful person on earth and believe that this guy is genuinely interested in getting to know the real you.

A guy who truly cares about you will compliment you on other things, too—like how smart you are, or how much he loves your laugh.

6. You haven’t met important people in his life

If you notice that he doesn’t want to introduce you to anyone important— his family, friends, or coworkers—in his life after dating for months, he might be using you for pleasure.

Because if he’s not willing to let you meet the people who matter in his life, it could be because he doesn’t see much of a future with you.

If this is the case, he may have ulterior motives for dating you.

Also, keep an eye out for whether or not this guy is interested in meeting your friends and family members.

If he isn’t asking about them or paying attention when you talk about them (or worse yet, if he’s rude about them), then it’s likely that he’s just using you for your body and nothing else.

7. Your communication is superficial

He’s only ever talked about superficial things with you (e.g., what music is popular right now or which celebrity is dating who).

He hasn’t shared anything meaningful about himself or invited you into any kind of deeper conversation with him; instead, your conversations have been shallow and surface-level at best.

Then he doesn’t plan to have anything deep with you.

Deep conversations lead to the emotional connection that makes a relationship stable and strong.

8. You only see each other in private 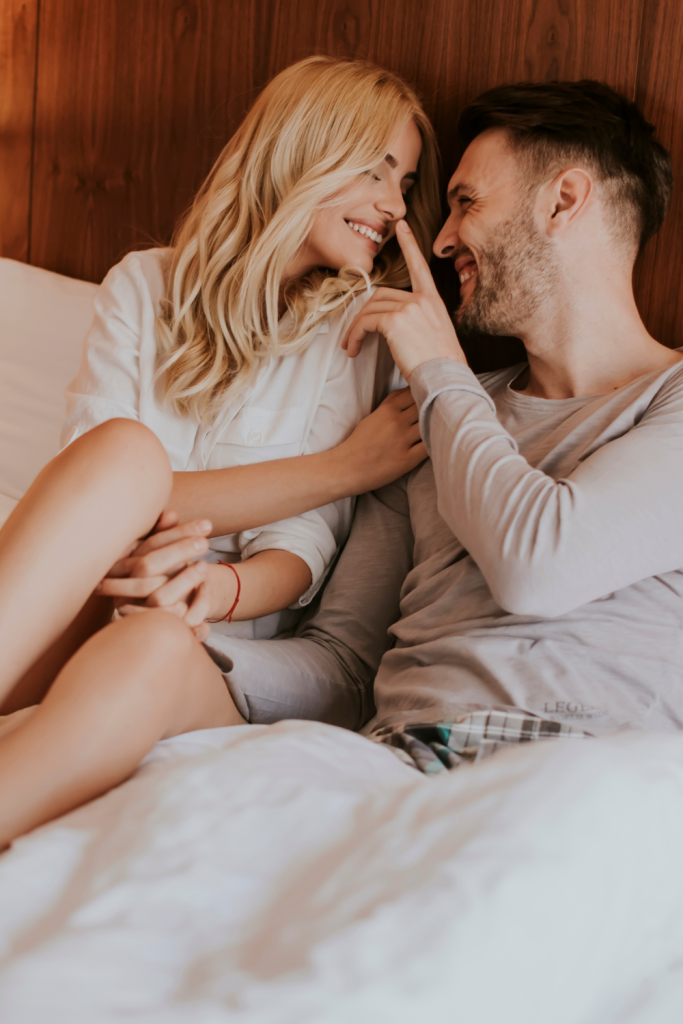 If your guy only wants to hang out with you behind closed doors e.g his house, your house, a hotel, or anywhere he knows you’ll put out, then his motives are not good.

Part of dating is going to different fun places with your partner to create memories and build an emotional connection.

If a guy does not want that with you but always wants to be indoors making out and rolling in the hay, it’s one of the huge signs he is using you for your body.

You can’t debate this, sis.

9. He can’t keep his hands off you 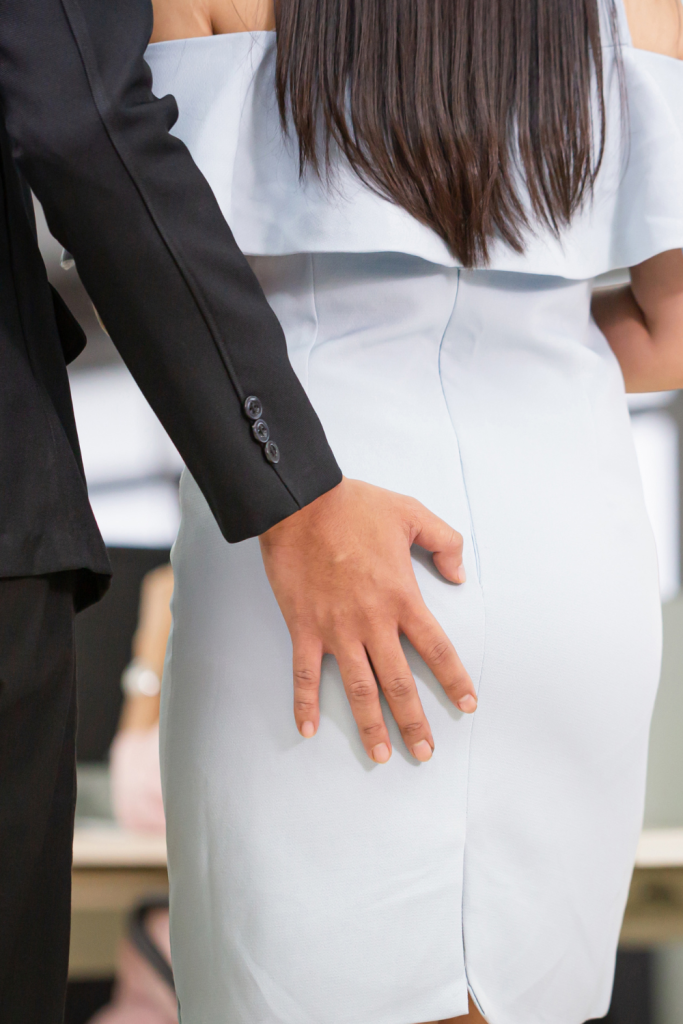 If a guy is using you for your body, he’ll be all over it.

He won’t be able to keep his hands off you.

He’s touching you and knows where to touch so that there’ll be less resistance from you when he wants you.

If a guy is using you for your body, he’ll probably be jealous of the people who look at you.

He may even ask questions that are not appropriate like if other guys are hitting on you.

He might ask you things like “Is this guy cute?” or “What do you think of that guy?”

He’s not interested in your mind or your personality, because if he was, he wouldn’t be so insecure and possessive of you.

11. He gets angry when you can’t meet up with him 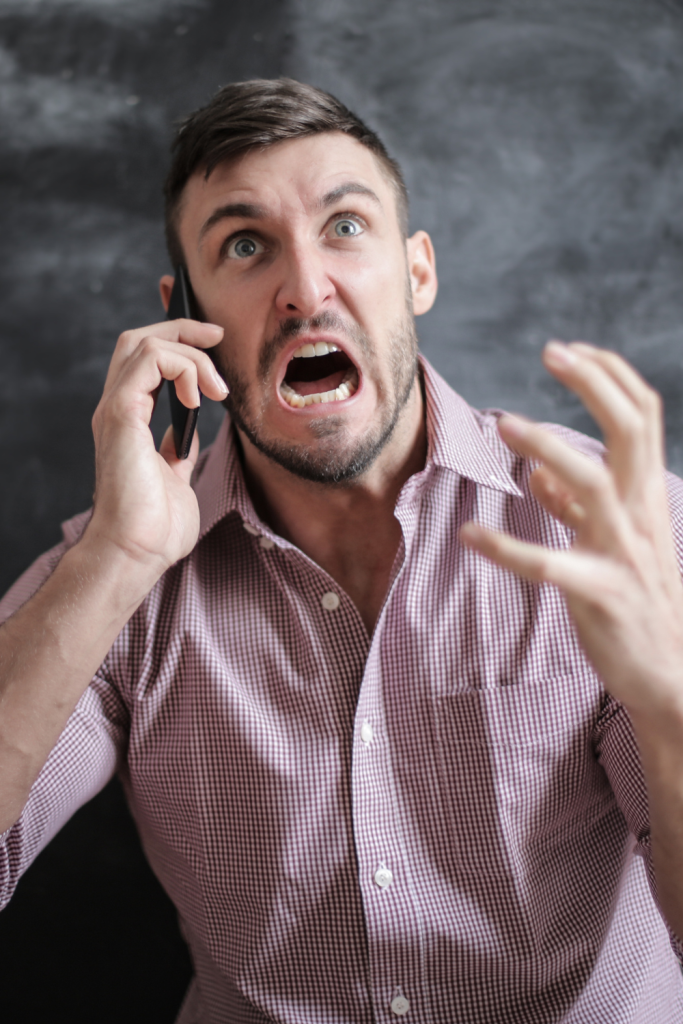 One of the biggest signs a guy is using you for your body is that he gets angry when you turn down his invitation to meet.

He wants to get some from you and doesn’t care about what’s going on in your life.

He just wants your body whenever he wants it—and if that means being able to see you whenever it suits his schedule, then so be it.

The thing is, this isn’t just about sex: it’s also about respect.

If someone can’t respect your time or your schedule enough to make plans with you ahead of time, they probably don’t respect anything else about you either (like how intelligent and talented you are).

He’s only using you for a booty call, and that doesn’t require the effort that a real relationship requires.

12. He tries to isolate you from your loved ones

If a guy is using you for your body, he will try to isolate you from your loved ones.

This can be done by making sure that everyone else in your life is “bad news,” or by simply making himself the center of your attention.

Isolation is a common tactic of abusers and users because it makes it harder for you to see what’s going on around you—and easier for them to get away with their behavior.

If a guy is isolating you from your friends and family, it’s not just because he doesn’t want them around—it’s also because he knows they’ll notice if something’s wrong.

If these signs are starting to sound familiar, don’t worry—you can still get out of this situation without being heartbroken.

The key is to not waste time trying to make things work with someone who doesn’t care about you except, of course, sex is all you want from him. 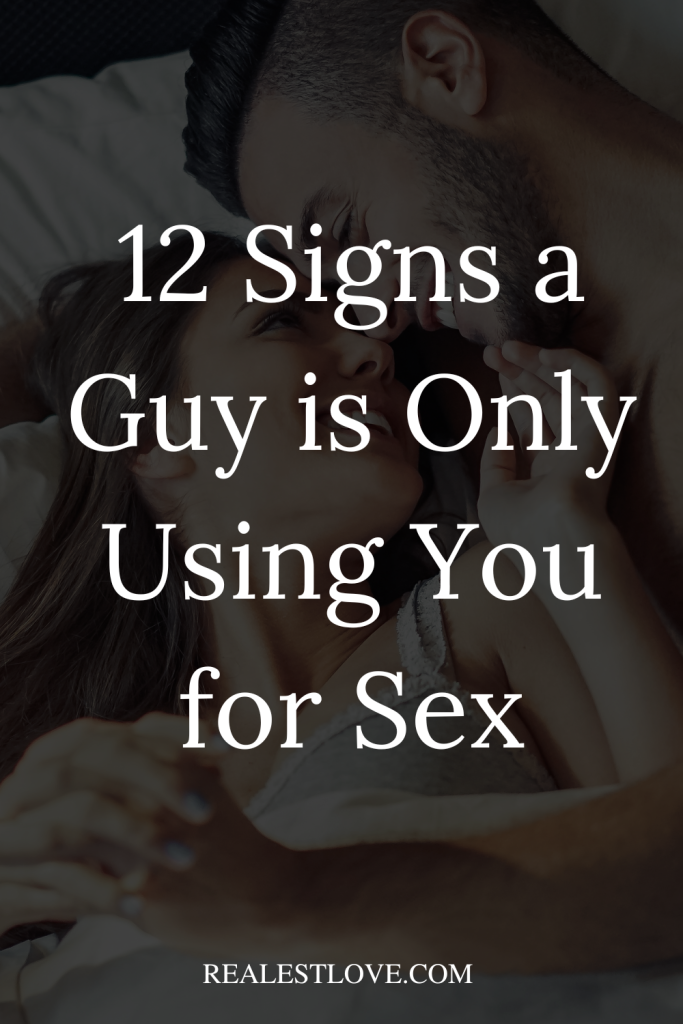