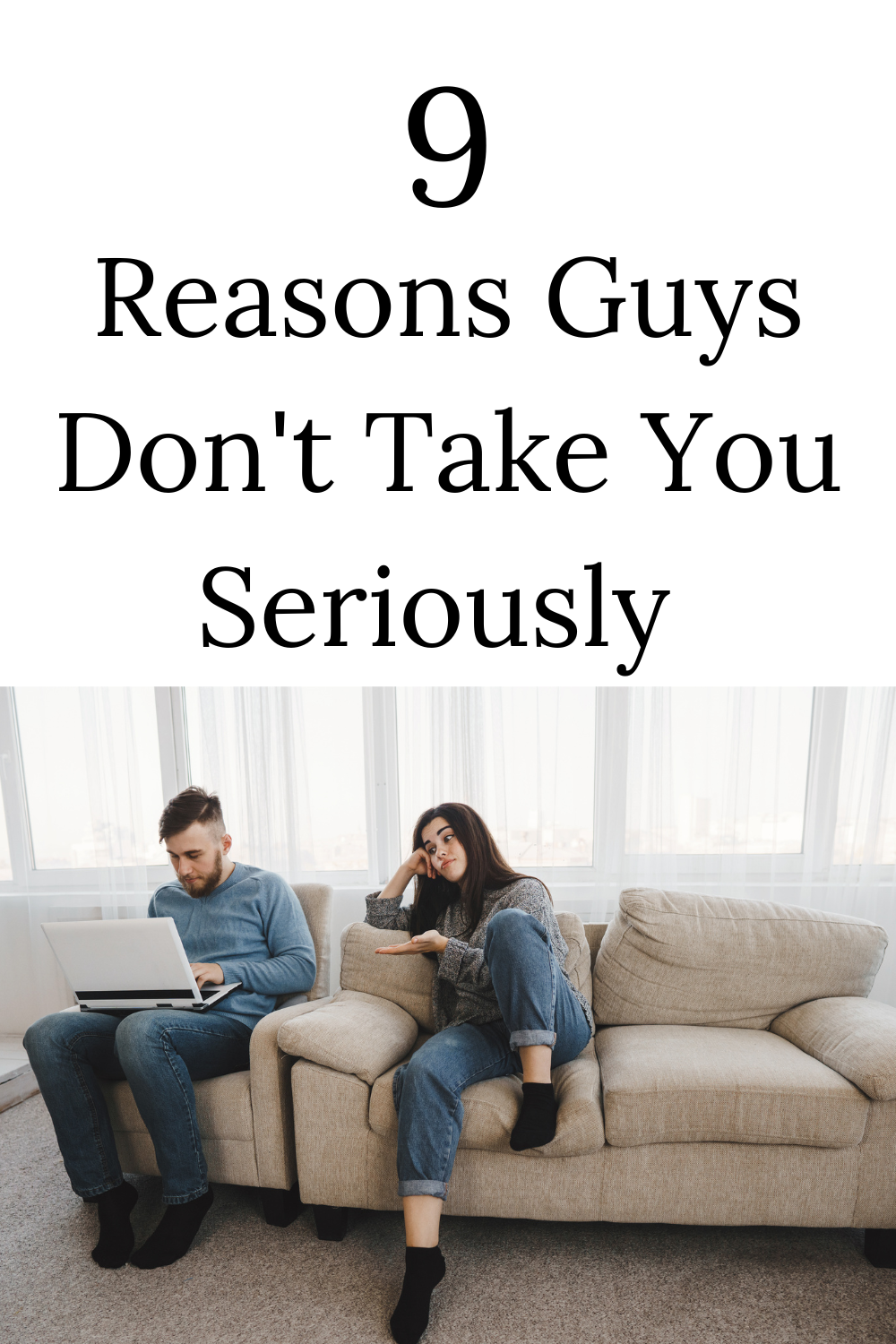 A lot of women out there are smart, successful, and funny.

So why is it that some guys just don’t seem to take them seriously?

If you’re finding yourself in this situation repeatedly, it might be due to one (or more) of the following reasons.

Keep reading to find out what they are and how you can fix them.

1. You’re Not Dressing the Part 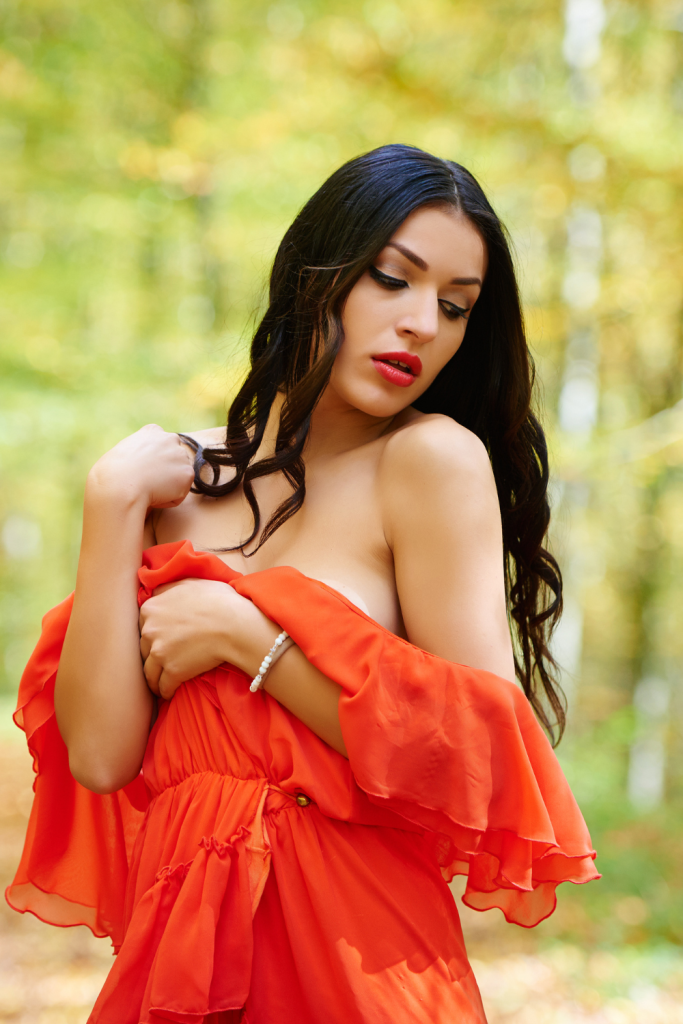 If you want to be taken seriously, you need to dress the part.

That doesn’t mean you need to wear a stuffy suit or anything like that (unless, of course, your job requires it).

But it does mean that you should take care of how you present yourself.

Make sure you’re not wearing anything too revealing or provocatively.

If you wear very short skirts and low-cut tops, men might think of you as someone who’s there for their pleasure.

You want the focus to be on your words, ideas, and personality, not just your body.

Also, while you may think dressing like a hobo will make you more approachable, it’s actually making you less approachable.

Men want to talk to women who take care of themselves and look their best.

Even if the guy isn’t looking for anything serious, he’ll still appreciate your effort to look nice.

And even if he is looking for something serious, it shows that you’re confident in yourself and what you have to offer.

2. You’re Being Too Jokey

Women have a reputation for being overly serious and taking things too seriously, but sometimes it’s the opposite.

When you’re cute, funny, and charming, you can get away with a lot.

But there’s a fine line between being cute and jokey and annoying.

Guys know that it’s not cool to be too much of a jokester —they want to be taken seriously.

And if you’re acting like you don’t care about anything in life other than your own amusement, then they are going to assume you can’t be serious about a relationship as well.

Another problem with being too jokey is that it makes you seem like you have no real thoughts or opinions.

You’re just playing around, which makes it hard to take you seriously.

3. You’re Being Too Serious 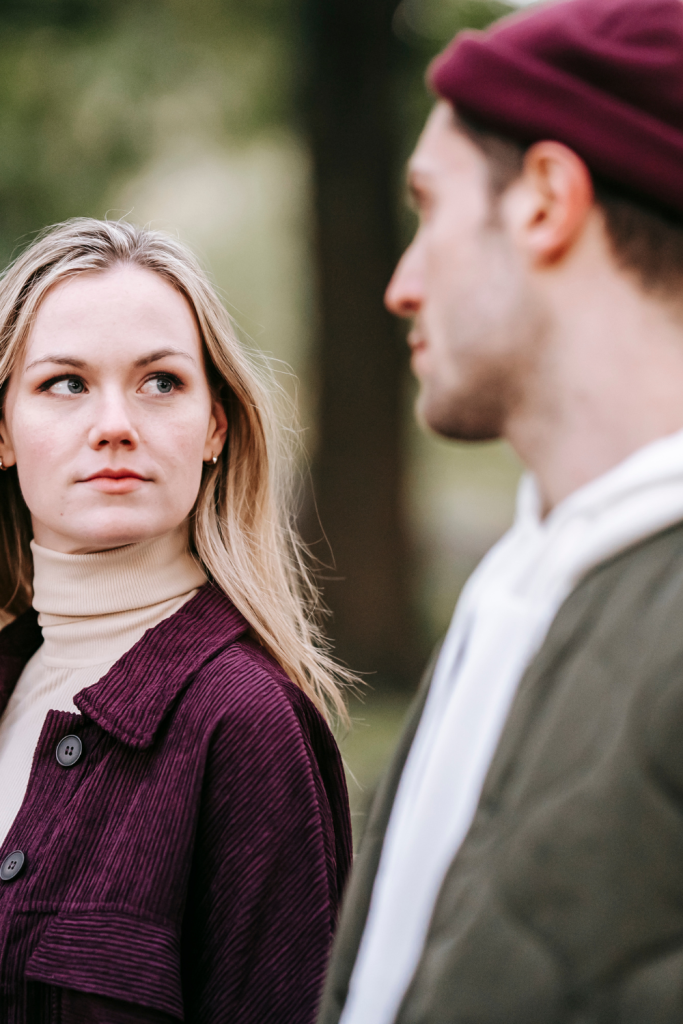 On the flip side of the coin is being too serious.

Sure, it’s great when women know what they want out of life and go after it head on — but when you’re always so intense and focused on your goals that you forget how to have fun or relax once in a while, it’s not going to do much for your dating prospects.

If guys think they’ll never be able to crack through your shell enough to see who you are under there.

Or if they think they’ll have no idea what makes you tick, they’ll start looking elsewhere for someone who doesn’t come off as quite uptight all the time. 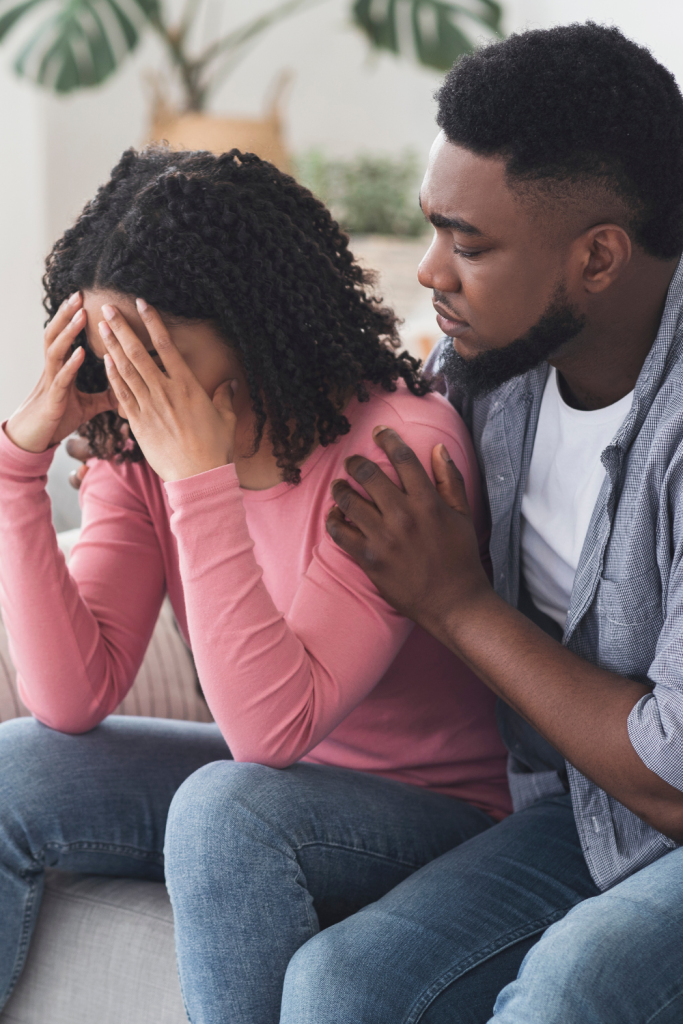 Just like being too jokey can be a turnoff, being overly emotional can make it hard for guys to take you seriously.

Women are generally more emotional than men, which is not always bad.

But when it comes to dating, it can be a problem if you’re too emotional.

You like to cry a lot, and you do it often.

You have a lot of feelings, and you aren’t afraid to share them with the world, even when it’s not appropriate.

You get very upset over small things that don’t matter in the grand scheme of things.

You are easily swayed by emotions and often make decisions based on what you feel rather than what you know or think.

Hello sis; if your feelings are easily hurt, or you get angry at every little thing men say or do, they’ll be less likely to want to be around you.

It’s okay to cry occasionally, but if it happens all the time, it’s a turn-off.

Men want a real woman who can handle her emotions and keep them in check.

And if you’re not doing this, you’ll have difficulty getting guys to take you seriously.

If you want guys to listen to you and take you seriously, you need to take control of your emotions.

Don’t let them get the best of you.

When you are upset, don’t start crying or screaming.

Instead, try taking some time alone so that you can calm down before responding.

Once you’ve regained your composure, explain your feelings calmly and rationally.

This will go a long way in making sure you’re taken seriously. 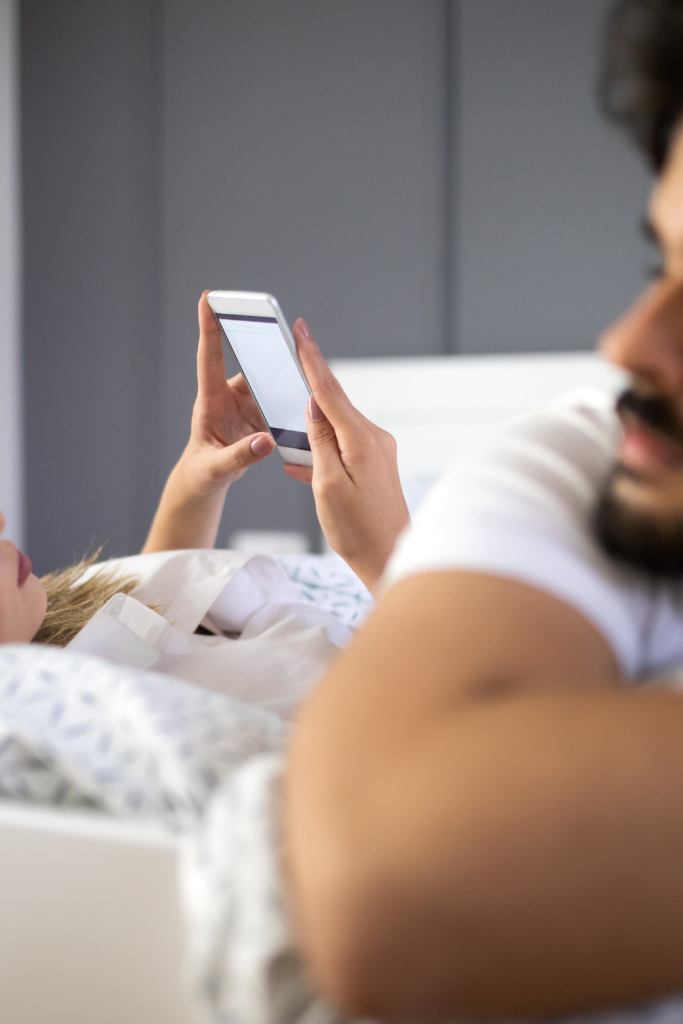 Men have a more direct approach to talking about their feelings, which isn’t always easy for us women to do.

We often avoid confrontation and do our best to avoid hurting others’ feelings.

Men don’t have that problem.

They will tell you exactly what’s on their mind, even if it might hurt your feelings in the process.

If you want guys to take you seriously, you must learn to be assertive without being aggressive.

Well, generally, no one likes confrontation.

But if you’re always trying to avoid it or sweeping things under the rug, it shows that you’re not interested in solving problems or dealing with difficult situations.

This can make it hard for guys (or anyone) to take you seriously.

Aggressive women are usually perceived as bossy and domineering.

They may even come across as intimidating or controlling.

Men don’t like this because they want to feel like they have control over their relationships with women.

If you’re too aggressive when talking to a guy, he’ll think that you’re trying to dominate him, and that’s not what most guys want in a relationship.

It’s okay for women to express their opinions during conversations but do so in a respectful manner that doesn’t come across as aggressive or condescending.

6. You’re Too Much of a Party Girl 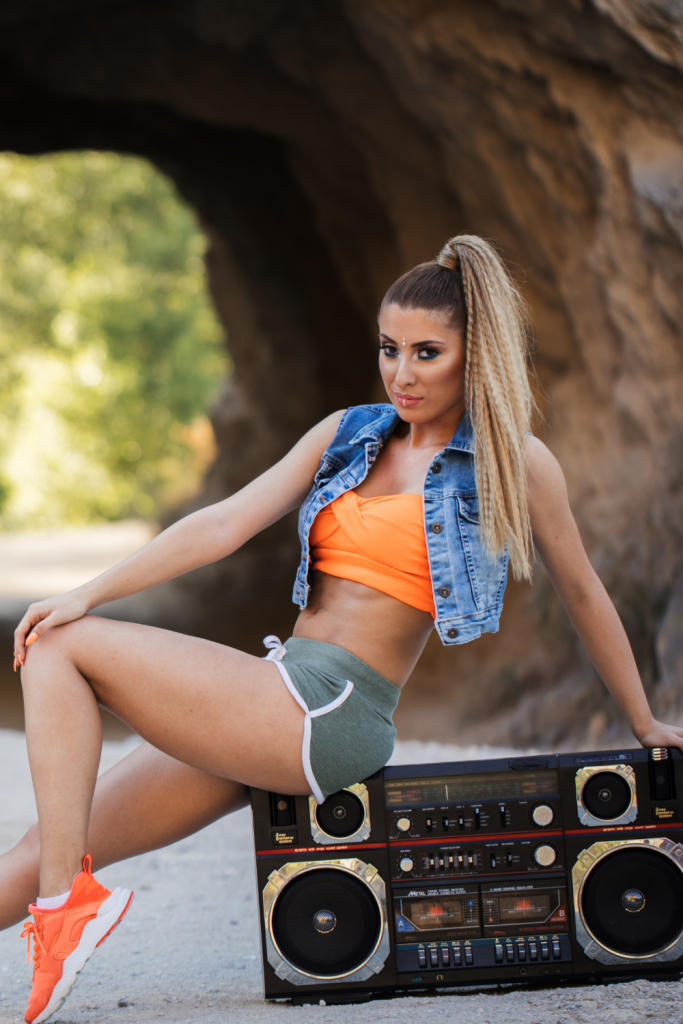 While it’s true that many guys like a girl who’s down to party, you shouldn’t make yourself seem less like a party girl.

If you’re always in the club or at the bar and never have time for anything else, guys might think that’s all you care about.

If they want a serious relationship, they won’t want to date someone who spends most of their time partying at bars and clubs instead of going on dates or spending time with them.

7. You Talk Too Much About The Past

Everyone has their own story and experiences that have shaped who they are today.

But when it comes to dating, it’s best to keep those stories to a minimum and focus on what’s happening right now.

Talking about your exes or past relationships will only make guys think you’re not ready for something new.

Confidence is the key to getting what you want in life.

But it’s also the key to getting a guy to take you seriously.

If you’re not confident, you’ll come off as needy, desperate and insecure.

When you’re confident, people will respect you.

When you’re confident, people will take you seriously.

When you’re confident, people will want to be around you.

But there’s one thing that can make all of those things go away—and it’s something that women tend to struggle with more than men: self-doubt.

Self-doubt is something that can sneak up on anyone at any time, but it’s especially prevalent in the dating world.

We’ve all had those moments where we don’t feel like we’re enough or that our date isn’t going well or even that someone else is prettier or smarter than us.

And that can be enough for us to lose our confidence in ourselves and turn into someone who isn’t taken seriously by anyone.

Work on exuding confidence in your words and actions, and pretty soon, people will start taking notice – including guys.

Some men are conditioned to not take women seriously.

No matter how well you dress and act, some men just won’t take you seriously as a potential girlfriend.

They’ll think of you as a friend, or even worse, a sex object.

In conclusion, if guys aren’t taking you seriously, there’s usually a reason why.

And more often than not, it has to do with how you are behaving or presenting yourself.

The good news is that these things are all within your control.

So if you want guys to start taking you more seriously, simply make some adjustments in how you act and dress, and be more mindful of when jokes are appropriate.

Do all of this while maintaining confidence in yourself, and soon enough, guys will start seeing – and respecting – the smart, successful woman you are.

And if you are not guilty of any of the above behaviors, maybe you just have to keep putting yourself out there and wait until love finds you. 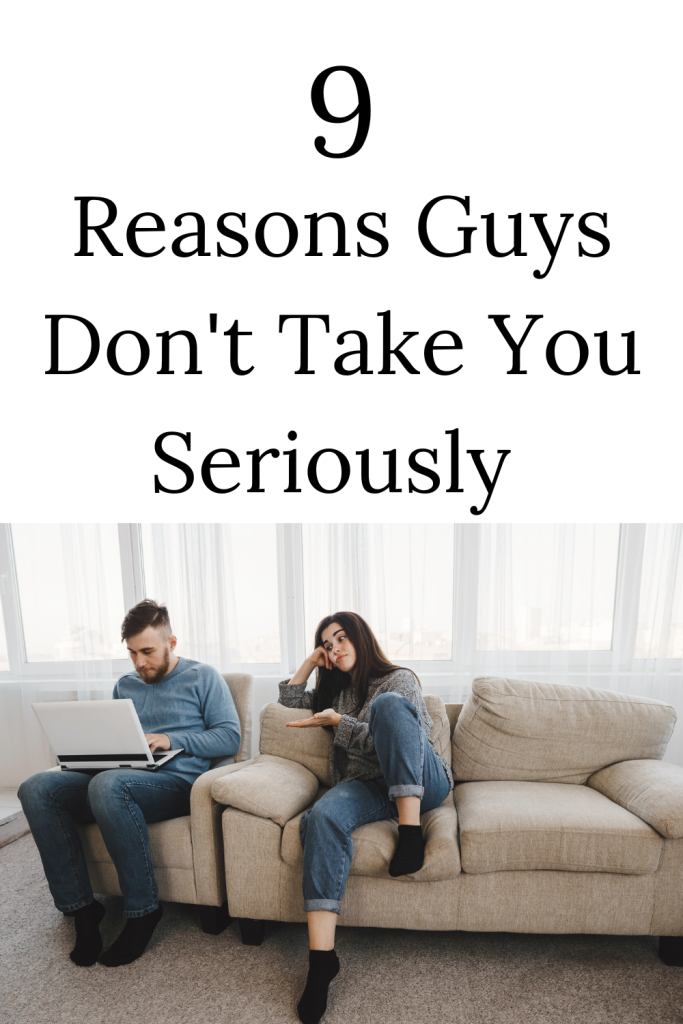